Around 1905, Prokudin-Gorsky envisioned and formulated a plan to use the emerging technological advances that had been made in color photography to document the Russian Empire systematically. Through such an ambitious project, his ultimate goal was to, ‘educate the schoolchildren of Russia with his “optical color projections” of the vast and diverse history, culture, and modernization of the empire.’ [source]

Outfitted with a specially equipped railroad-car darkroom provided by Tsar Nicholas II and in possession of two permits that granted him access to restricted areas and cooperation from the empire’s bureaucracy, Prokudin-Gorsky documented the Russian Empire around 1909 through 1915.

He conducted many illustrated lectures of his work. His photographs offer a vivid portrait of a lost world—the Russian Empire on the eve of World War I and the coming Russian Revolution. His subjects ranged from the medieval churches and monasteries of old Russia, to the railroads and factories of an emerging industrial power, to the daily life and work of Russia’s diverse population. [source]

Cathedral of St. Nicholas in Mozhaisk. Taken some time between 1911-1912

Turkmen man posing with camel loaded with sacks, probably of grain or cotton, Central Asia. circa 1905-1915

The Library of Congress Gets Involved

By Prokudin-Gorsky’s death, the tsar and his family had long since been executed during the Russian Revolution, and Communist rule had been established over what was once the Russian Empire. The surviving boxes of photo albums and fragile glass plates the negatives were recorded on were finally stored in the basement of a Parisian apartment building, and the family was worried about them getting damaged. The United States Library of Congress purchased the material from Prokudin-Gorsky’s heirs in 1948 for $3500–$5000. The LOC counted 1,902 negatives and 710 album prints without corresponding negatives in the collection. [source]

Young Russian peasant women in front of traditional wooden house, in a rural area along the Sheksna River near the small town of Kirillov. Taken in 1909.

Rafts on the Peter the Great Canal. City of Shlisselburg. Taken in 1909.

Zindan (traditional Central Asian prison), with inmates looking out through the bars and a guard with Russian rifle, uniform, and boots, likely in Bukhara, Uzebkistan]. circa 1905-1915

Due to the very specialized and labor-intensive processes required to make photographic color prints from the negatives, only about a hundred of the images were used in exhibits, books and scholarly articles during the half-century after the Library of Congress acquired them. Their widest exposure was in the 1980 coffee table book, Photographs for the Tsar: The Pioneering Color Photography of Sergei Mikhailovich Prokudin-Gorskii Commissioned by Tsar Nicholas II, in which the color images are combined yellow, magenta and cyan ink-on-paper halftones mass-produced with a multicolor printing press in the usual way. [source]

Laying concrete for the dam’s sluice. [Beloomut]. Workers and supervisors posing for photograph amid preparations for pouring cement for sluice dam foundation across the Oka River near Beloomut. Taken in 1912.

Stork nests on unidentified religious building, probably a mosque in Bukhara. Taken in 1911.

Dagestani couple posed outdoors for a portrait. Taken in 1904.

It was only with the advent of digital image processing that multiple images could be quickly and easily combined into one. The Library of Congress undertook a project in 2000 to make digital scans of all the photographic material received from Prokudin-Gorsky’s heirs and contracted with the photographer Walter Frankhauser to combine the monochrome negatives into color images. He created 122 color renderings using a method he called digichromatography and commented that each image took him around six to seven hours to align, clean and color-correct. In 2001, the Library of Congress produced an exhibition from these, The Empire That Was Russia: The Prokudin-Gorskii Photographic Record Recreated. [source]

View of Suzdal along the Kamenka River. Taken in 1912.

Molding of an artistic casting. [Kasli Iron Works]. Production of artistic casting in the Kasli Iron Works, located in the heart of the Ural Mountains between the cities of Ekaterinburg and Cheliabinsk. The plant was known for the high quality of its cast iron products and for its highly-skilled work force, which numbered over three thousand persons at the time this photograph was taken in 1910.

Alternators made in Budapest, Hungary, in the power generating hall of a hydroelectric station in Iolotan on the Murghab River. This was the Hindu Kush Hydro Power Plant, in today’s Turkmenistan, the largest hydro power plant of Russian Empire (built 1909). Taken in 1911.

Muslim man decorated with military medal, wearing traditional dress and headgear, with a sheathed dagger at his side. Dagestan. Taken in 1904.

The Village of Kolchedan in Ural Mountains, taken in 1912.

View of Saltinskoe (Salty) gorge in the Caucasus Mountains in Dagestan. Taken in 1904.

View of the Nilova Monastery. The Monastery of St. Nil’ on Stolobnyi Island in Lake Seliger in Tver’ Province, northwest of Moscow, illustrates the fate of church institutions during the course of Russian history. St. Nil (d. 1554) established a small monastic settlement on the island around 1528. In the early 1600s his disciples built what was to become one of the largest, wealthiest, monasteries in the Russian Empire. The monastery was closed by the Soviet regime in 1927, and the structure was used for various secular purposes, including a concentration camp and orphanage. In 1990 the property was returned to the Russian Orthodox Church and is now a functioning monastic community once more. Taken in 1910.

Fabric merchant. Samarkand. Merchant’s display includes silk, cotton, and wool fabrics as well as a few carpets. A framed page of the Koran hangs at the top of the stall. circa 1905-1915.

Melon vendor, dressed in traditional Central Asian attire, at his stand in the marketplace of Samarkand in present-day Uzbekistan. circa 1905-1915.

Vintage Mugshots from the 1920s

Stanley Kubrick’s Photos of New York Life in the 40s 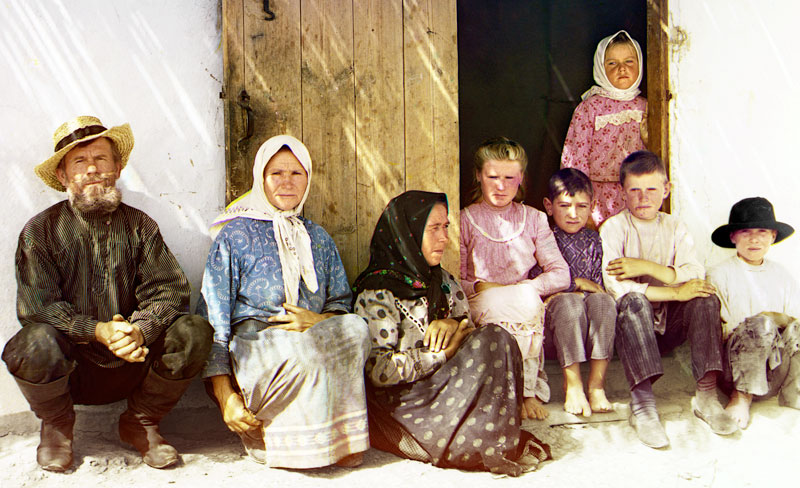