Pillars of Creation is one of the most famous photographs ever taken by the Hubble Space Telescope. In this amended version by reddit user TopalthePilot we get an appreciation for their amazing scale.

Pillars of Creation are elephant trunks of interstellar gas and dust in the Eagle Nebula, specifically the Serpens constellation, some 6,500–7,000 light years from Earth. They are so named because the gas and dust are in the process of creating new stars, while also being eroded by the light from nearby stars that have recently formed.

Taken on April 1, 1995, the astronomers responsible for the photo were Jeff Hester and Paul Scowen from Arizona State University. The region was rephotographed by ESA’s Herschel Space Observatory in 2011, and again by the Hubble in 2014 with a newer camera (seen below).

Three-colour composite mosaic image of the Eagle Nebula (Messier 16, or NGC 6611), based on images obtained with the Wide-Field Imager camera on the MPG/ESO 2.2-metre telescope at the La Silla Observatory. At the centre, the “Pillars of Creation” can be seen. This wide-field image shows not only the central pillars, but also several others in the same star-forming region, as well as a huge number of stars in front of, in, or behind the Eagle Nebula. The cluster of bright stars to the upper right is NGC 6611, home to the massive and hot stars that illuminate the pillars. The “Spire” — another large pillar — is in the middle left of the image.

The towering pillars are about 5 light-years tall and bathed in the blistering ultraviolet light from a grouping of young, massive stars located off the top of the image. Streamers of gas can be seen bleeding off the pillars as the intense radiation heats and evaporates it into space. Denser regions of the pillars are shadowing material beneath them from the powerful radiation. Stars are being born deep inside the pillars, which are made of cold hydrogen gas laced with dust. The pillars are part of a small region of the Eagle Nebula, a vast star-forming region 6,500 light-years from Earth. The colors in the image highlight emission from several chemical elements. Oxygen emission is blue, sulfur is orange, and hydrogen and nitrogen are green. 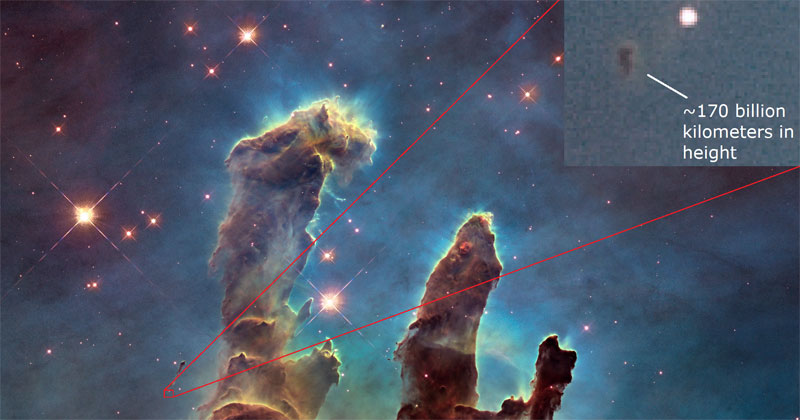