THE MOSS COVERED FOREST OF YAKUSHIMA

Photograph by Balu991 on deviantART

Yakushima is one of the Osumi Islands and has an area of about 500 km² and a population of roughly 15,000. It lies to the south of Kyushu in Kagoshima Prefecture, Japan. It is covered in dense forest noted especially for old growth Cryptomeria trees known as sugi in Japan and magnificent rhododendrons.

The island forms part of Kirishima-Yaku National Park. In 1980 an area of 18,958 hectares was designated a UNESCO Man and the Biosphere Reserve. In 1993 10 hectares of wetland at Nagata-hama was designated a Ramsar Site. It is the largest nesting ground for the endangered loggerhead sea turtle in the North Pacific. Yakushima’s unique remnant of a warm-temperate ancient forest has been a natural World Heritage Site since 1993.

In the Wilderness core area (12.19 square kilometres (3,010 acres)) of the World Heritage Site, no records of past tree cutting can be traced. Yakushima is Japan’s wettest place, and precipitation in Yakushima is one of the world’s highest at 4,000 to 10,000 mm. It is said to rain “35 days a month”. It is the southernmost place in Japan where there is snow in the mountains, often for months, while the ocean temperature is never below 19°C.

The Yakusugi Forest is visited by 300,000 tourists every year. [Source: Wikipedia] 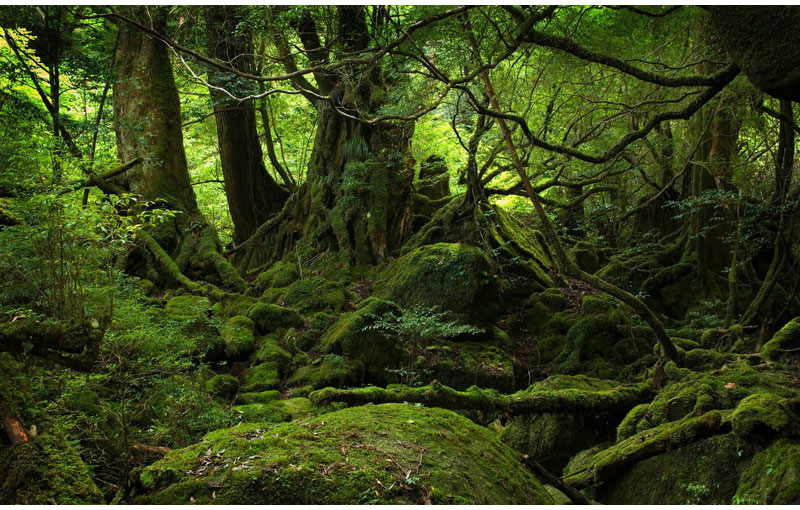