Earlier this year, artist and photographer (and fellow Canadian!) Benjamin Von Wong ventured to Bali for the photo shoot of a lifetime. The always ambitious photographer envisioned an underwater shoot with freedivers amongst a shipwreck 25 meters (82 ft) beneath the surface.

To pull off the project, Von Wong assembled a team that consisted of seven divers and two freediving models, Nora Li and Camilla Argent (Nora and Camilla can hold their breath for 3:36 and 4:40 respectively). Shooting underwater carries a unique set of challenges, as Von Wong outlines in his informative blog post:

– Normal clothes couldn’t be rented since the sea water would wreck them, so they had to find a designer willing to part with the clothing they’d lend them (h/t Ali Charisma)
– Normal assistants wouldn’t work, specially trained safety divers were going to be necessary to ensure a smooth photo shoot
– Scouting would be complicated – local divers would be necessary for them to navigate around the wreck and deal with unpredictable changes in the weather and tide
– Lighting and gear would be limited – shooting underwater meant that they had to work with what was available: on camera strobes or natural light

The shoot was a huge success and you can see a few of the results along with a couple behind the scenes photos. Also embedded below is a behind the scenes video shot by Chindianboy Studios. The viral video has already been viewed nearly 750,000 times and offers a glimpse into the effort that goes into a complex shoot like this.

For more from Von Wong, be sure to check him out at the online links below.

Behind the Scenes
with Benjamin Von Wong

Playing with the Moon by Laurent Laveder

Girlfriend Leads Photographer Around the World

Coyote and Badger Spotted Strolling Through the Forest Together 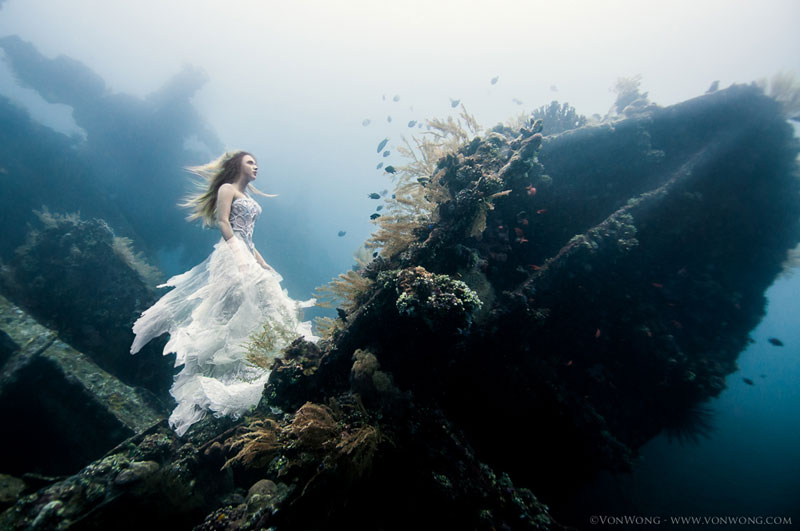