NASA took its first major step towards a manned mission to Mars today with the successful launch and landing of its Orion spacecraft. Orion completed its first voyage to space, traveling farther than any spacecraft designed for astronauts has been in more than 40 years.

Orion blazed into the morning sky at 7:05 a.m. EST, lifting off from Space Launch Complex 37 at Cape Canaveral Air Force Station in Florida on a United Launch Alliance Delta IV Heavy rocket. The Orion crew module splashed down approximately 4.5 hours later in the Pacific Ocean, 600 miles southwest of San Diego. During the uncrewed test, Orion traveled twice through the Van Allen belt where it experienced high periods of radiation, and reached an altitude of 3,600 miles above Earth. Orion also hit speeds of 20,000 mph and weathered temperatures approaching 4,000 degrees Fahrenheit as it entered Earth’s atmosphere.

On future missions, Orion will launch on NASA’s Space Launch System (SLS) heavy-lift rocket currently being developed at the agency’s Marshall Space Flight Center in Huntsville, Alabama. A 70 metric-ton (77 ton) SLS will send Orion to a distant retrograde orbit around the moon on Exploration Mission-1 in the first test of the fully integrated Orion and SLS system. [source]

The exciting launch was captured by the United Launch Alliance and you can see high-res photos of the event below along with an HD video at the end of the post. For more high-res images from ULA see here.

26 HQ Photos by Rosetta and Philae 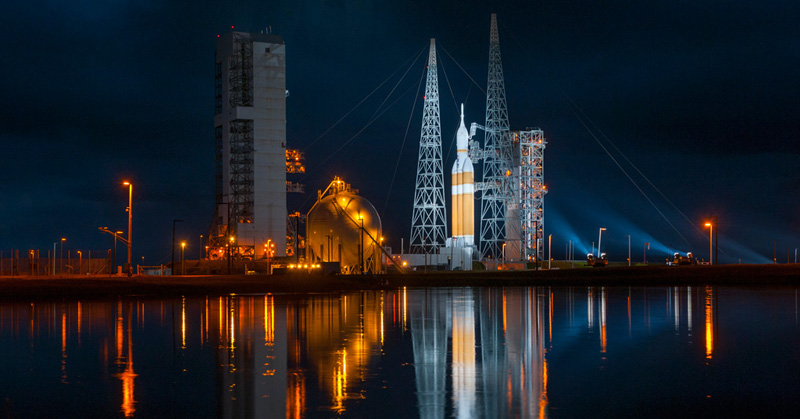