In this beautiful sunrise capture, we see a river fog filling San Francisco Bay as parts of the Golden Gate Bridge peak out above the fog. The Golden Gate Bridge is a suspension bridge spanning the Golden Gate strait, the mile-wide, three-mile-long channel between San Francisco Bay and the Pacific Ocean. The bridge is one of the most internationally recognized symbols of San Francisco, California, and the United States. It has been declared one of the Wonders of the Modern World by the American Society of Civil Engineers. It opened in 1937 and had, until 1964, the longest suspension bridge main span in the world, at 4,200 feet (1,300 m).

The blue hour is the period of twilight each morning and evening when the sun is a significant distance below the horizon and the residual, indirect sunlight takes on a predominantly blue hue. This effect is caused by the relative diffusability of short blue wavelengths of light versus the longer red wavelengths. During the blue “hour” (typically the period is about 40 minutes in length), red light passes straight into space while blue light is scattered in the atmosphere and therefore reaches the earth’s surface. 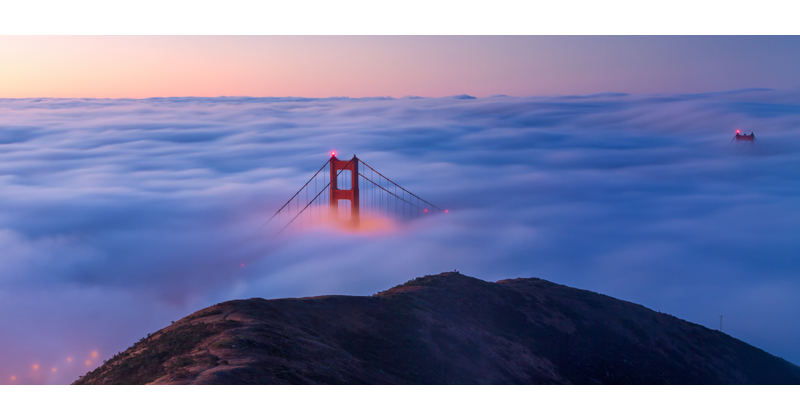