Connecting two of Milan’s most famous landmarks (The Duomo and La Scala) is the famous glass-vaulted arches of the Galleria. Formally known as the ‘Galleria Vittoria Emanuele II‘, the street is covered by an arching glass and cast iron roof. A landmark in its own right, the Galleria is a sight to behold.

Below you will find photographs of this beautiful street along with information and background sprinkled throughout. Enjoy!

The Galleria Vittorio Emanuele II is a double arcade in the center of Milan, Italy. The structure is formed by two glass-vaulted arcades intersecting in an octagon covering the street connecting Piazza del Duomo to Piazza della Scala.

An arcade is a succession of arches, each counterthrusting the next, supported by columns or piers or a covered walk enclosed by a line of such arches on one or both sides. The idea of an arcade containing shops began in France in 1798 with the Passage du Caire created as a tribute to the French campaign in Egypt and Syria.

It was appreciated by the public for its protection from the weather, noise and filth of the streets allowing people to stroll in safety and comfort in a forerunner of the shopping mall. [Source: Wikipedia]

The Galleria is named after Vittorio Emanuele II, the first king of the Kingdom of Italy. It was originally designed in 1861 and built by Giuseppe Mengoni between 1865 and 1877. [Source]

The Duomo is the cathedral church of Milan, Italy. It is dedicated to Santa Maria Nascente (Saint Mary Nascent), and is the seat of the Archbishop of Milan, currently Cardinal Angelo Scola. The Gothic cathedral took nearly six centuries to complete and is the fourth largest cathedral in the world. La Scala is a world renowned opera house inaugurated on 3 August 1778.

Inside the Galleria, all the commercial activities must display an insignia with gold writing on a black background. [Source]

In the central mosaic there is a depiction of the bull from Turin Coat of Arms. The tradition tells that if a person put its right heel on the bull’s genitals and turn on himself three times, this will bring good luck. This practice has caused damage to the mosaic and a hole has developed on the place of the bull’s genitals. [Source]

The structure of the Galleria is 32 metres high (105 ft), comprises 353 tonnes of iron utilised for the skeleton of the cover, and its octagonal-shaped roof reaches a height of 47 metres (154 ft). [Source]

More than 130 years after its inauguration, the four-story arcade includes elegant shops selling most things from haute couture and jewelry to books and paintings, as well as restaurants, cafés, and bars.

The Galleria is famous for being home to some of the oldest shops and restaurants in Milan, such as the historic Biffi Caffè, founded in 1867 by Pastry Chef to His Majesty Paolo Biffi and (in 1882) the first Milanese café to install electric lighting, the Savini restaurant, the silverware store Bernasconi and the Art Nouveau classic Zucca’s Bar.

Today, the Galleria is the site for many luxury goods shops, including Prada, Massimo Dutti, Gucci and Louis Vuitton, as well as fast food restaurants such as McDonald’s. [Source: Wikipedia]

15 Beautiful Libraries Around the World

20 Impressive Moats Around the World

25 Incredible Concert Halls Around the World 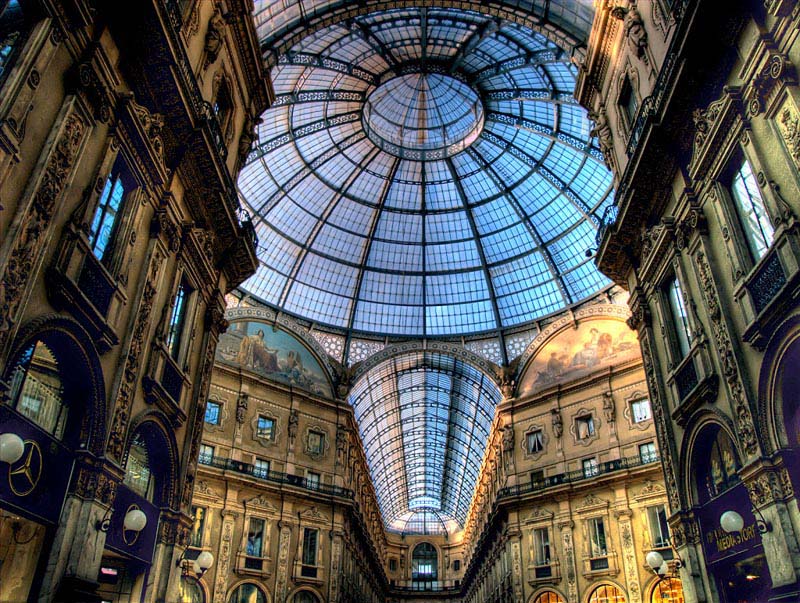