Last year, Cowan’s Auctions put up a lot of 282 Vietnam War-era Zippo lighters featuring personalized and anonymous engravings chosen by U.S. soldiers, sailors, and airmen during deployment. The collection was compiled by American artist Bradford Edwards over several years in the 1990s, on-site in Vietnam. The collection sold for $35,250 on June 21, 2012.

The following is an excerpt from the Cowan’s Auctions lot description:

Edwards explains that he is fascinated with the lighters as windows into the minds and experiences of the men experiencing a certain place and time. As Vietnam has evolved into a more modern and open nation in the last 20 years, foreign tourists have driven a growing market in the mementos, leading to an explosion in fakes. Edwards proclaims there are no real Zippos in Vietnam now. James Fiorella, author of The Vietnam Zippo (Schiffer Publishing, 1998) and probably the only authority on the subject with an expertise equal to Edwards, agrees, and warns collectors that over 95% of Zippos being sold in the open-air markets of Ho Chi Minh City and Ebay alike are fakes.

Edwards was careful not to target specific sentiments or designs in the engravings, but simply to seek out authenticity and let the objects speak for themselves. As such, the lighters capture a wide range of feelings and opinions about the war, from the obscenity-laden anti-army mottoes of the unwilling draftees, to the simple love notes of the homesick, to the 8 Special Forces emblazoned lighters, conspicuously absent of any further embellishment.

The Vietnam War represented something different from all other American Wars, previous and since. There were the regular army soldiers, many raised by World War II heroes and viewing their job as a duty and privilege. There were victims of fate, the unwilling, drafted by lottery, many poor and minority, resentful of their government and military superiors. And there were those along for the ride, not interested in glory or politics, merely trying to follow orders and earn their ticket home. Regardless, they were all connected by the Zippo, the utilitarian tool carried by nearly all soldiers since World War II, a symbol of dependability and the rare thing that all soldiers could count on. Used for lighting cigarettes, heating food, illuminating letters from home, or setting fire to huts of suspected VC, Zippos were used so frequently in Search & Destroy missions that GIs nicknamed them “Zippo Missions” or “Zippo Raids.” After purchasing one from the post exchange store for $1.80, a soldier could personalize his lighter at sidewalk tents with one of wide selection of stock designs or a personalized message.

[Cowan’s Auctions via Buzzfeed via Oilburner]

The History of Pigeon Camera Photography 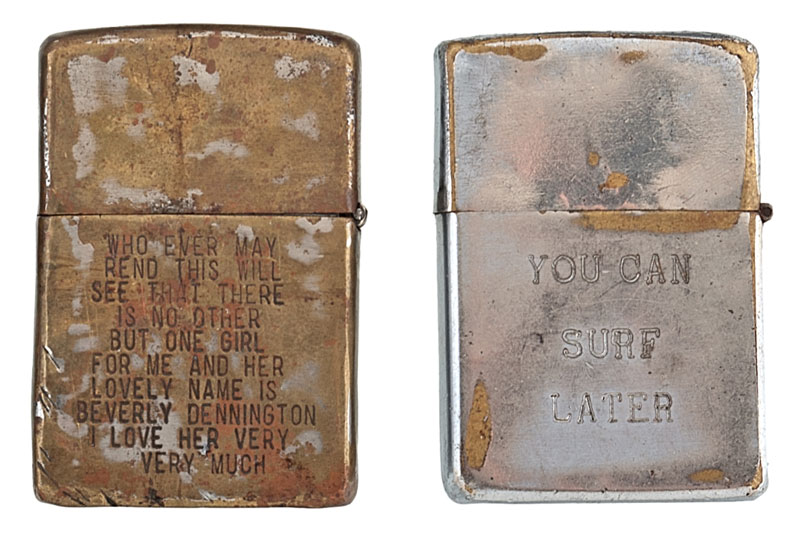