To deny the awesomeness of frogs would be foolish. They are colourful, they are diverse, and if they were the size of humans, they could leap over buildings! Below you will find 10 facts and 25 pictures about our amphibious friends, the mighty Frog! All hail!

The distribution of frogs ranges from tropic to subarctic regions, but most species are found in tropical rainforests. Consisting of more than 5,000 species described, about 88% of amphibian species are frogs. [Source: Wikipedia]

The use of the common names “frog” and “toad” has no taxonomic justification. From a taxonomic perspective, all members of the order Anura are frogs, but only members of the family Bufonidae are considered “true toads”. The use of the term “frog” in common names usually refers to species that are aquatic or semi-aquatic with smooth and/or moist skins, and the term “toad” generally refers to species that tend to be terrestrial with dry, warty skin [Source: Wikipedia]

Photograph by MY LIVING PHOTOGRAPHY

The morphology of frogs is unique among amphibians. Compared with the other two groups of amphibians, (salamanders and caecilians), frogs are unusual because they lack tails as adults and their legs are more suited to jumping than walking [Source: Wikipedia]

Frogs range in size from 10 mm (0.39 in) (Brachycephalus didactylus of Brazil and Eleutherodactylus iberia of Cuba) to 300 mm (12 in) (goliath frog, Conraua goliath, of Cameroon). [Source: Wikipedia]

Frogs are generally recognized as exceptional jumpers, and the best jumper of all vertebrates. The Australian rocket frog, Litoria nasuta, can leap over 50 times its body length (5.5 cm), resulting in jumps of over 2 meters. The acceleration of the jump may be up to twice gravity. There are tremendous differences between species in jumping capability, but within a species, jump distance increases with increasing size, but relative jumping distance (body-lengths jumped) decreases. [Source: Wikipedia]

The skin secretions of some toads, such as the Colorado River toad and cane toad, contain bufotoxins, some of which, such as bufotenin, are psychoactive, and have therefore been used as recreational drugs. Typically, the skin secretions are dried and smoked. Skin licking is especially dangerous, and appears to constitute an urban myth. [Source: Wikipedia]

The frog’s digestive system begins with the mouth. Frogs have teeth along their upper jaw called the maxillary teeth, which are used to grind food before swallowing. These teeth are very weak and cannot be used to catch or harm agile prey. Instead, the frog uses its sticky tongue to catch food (such as flies or other insects). [Source: Wikipedia]

The frog has a highly developed nervous system which consists of a brain, spinal cord and nerves. Many parts of the frog’s brain correspond with those of humans. The medulla oblongata regulates respiration, digestion, and other automatic functions. Muscular coordination and posture are controlled by the cerebellum. The relative size of the cerebrum of a frog is much smaller than that of a human [Source: Wikipedia]

The life cycle of frogs, like that of other amphibians, consists of four main stages: egg, tadpole, metamorphosis and adult [Source: Wikipedia]

Some frog calls are so loud, they can be heard up to a mile away. The call of a frog is unique to its species. Frogs call by passing air through the larynx in the throat. In most calling frogs, the sound is amplified by one or more vocal sacs, membranes of skin under the throat or on the corner of the mouth that distend during the amplification of the call [Source: Wikipedia]

IF YOU ENJOYED THIS ARTICLE, THE SIFTER HIGHLY RECOMMENDS: 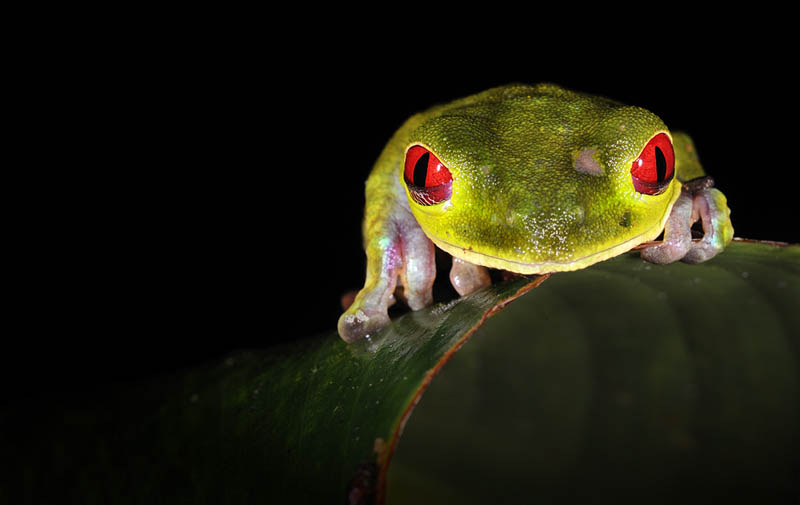