Picture of the Day: A Sunset Eclipse

In this beautiful capture we see two children gazing at a partial solar eclipse over Manila Bay in the Philippines back in 2009. As seen from the Earth, a solar eclipse occurs when the Moon passes between the Sun and the Earth, and the Moon fully or partially blocks the Sun. This can happen only during a new moon, when the Sun and the Moon are in conjunction as seen from Earth. In a total eclipse, the disk of the Sun is fully obscured by the Moon. In partial and annular eclipses (like the one above) only part of the Sun is obscured.

The Sun’s distance from the Earth is about 400 times the Moon’s distance, and the Sun’s diameter is about 400 times the Moon’s diameter. Because these ratios are approximately the same, the Sun and the Moon as seen from Earth appear to be approximately the same size: about 0.5 degree of arc in angular measure. The Moon’s orbit around the Earth is an ellipse, as is the Earth’s orbit around the Sun; the apparent sizes of the Sun and Moon therefore vary.

As it is dangerous to look directly at the Sun, observers should use special eye protection or indirect viewing techniques.

Picture of the Day: A Sunset Eclipse 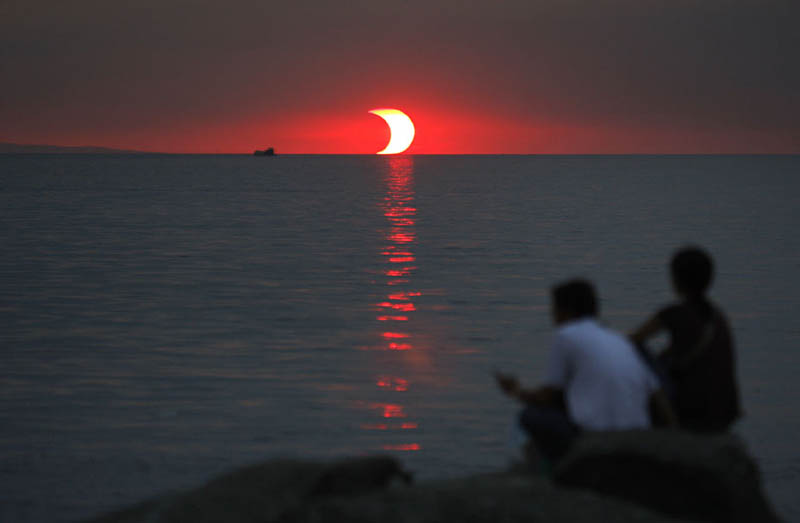