A tripoint, trijunction, or triple point (also, if inexactly, known as a tri-border area), is a geographical point at which the borders of three countries or subnational entities meet.

There are currently 157 international tripoints (i.e., tricountry points) by some accounts, and as many as 176 (or even 207) by others. Nearly half of these usually exact but sometimes slightly indefinite places are situated not on dry land but in rivers or lakes or seas. When on dry land, the exact tripoints are usually demarcated by the center or vertex of special (but highly various) markers or pillars. Often and increasingly such places are also the sites of sometimes extensive monumental memorials and expositions.

Usually, the more neighbours a country has, the more international tripoints that country has. China with 16 tripoints and Russia with 11 to 14 lead the list of states by number of tripoints. Within Europe, landlocked Austria has nine tripoints, among them two with Switzerland and Liechtenstein. Island countries such as the UK or Japan have no tricountry points (some, like Bahrain and Singapore, have tripoints in the territorial waters), nor have states with only one neighbour state, like Portugal or Denmark. Likewise the United States with two neighbour states has no tricountry points.

It is often illegal to pass a national border outside border controls, and therefore illegal to walk around many tripoint markers. According to the Schengen rules, it is illegal to pass the outside border of the Schengen area except at border controls. But it is legal to pass the border between two Schengen countries at any place. Countries with good relations will generally have the checkpoints a bit off the technical border line to allow tourists to walk around border marker monuments without getting in the way of immigration authorities. [Source: Wikipedia]

Below you will find a list of notable tripoints around the world, many with monuments or signs to mark the distinction. Enjoy!

Photograph by Taxiarchos228 at the German language Wikipedia

The Triple Frontier (Spanish: La Triple Frontera, Portuguese: Tríplice Fronteira) is a tri-border area along the junction of Paraguay, Argentina, and Brazil, where the Iguazú and Paraná rivers converge. Near the convergence are the cities of Ciudad del Este, Alto Paraná; Puerto Iguazú, Misiones and Foz do Iguacu, Paraná. This area is near Iguazú Falls and the Itaipú hydroelectric plant.

The Triple Frontier is an important tourist area, within the touristic subregion of the Región de las Aguas Grandes. Visitors can see the Tancredo Neves bridge, which connects the Argentine city of Puerto Iguazú and its Brazilian neighbor, Foz do Iguaçu. At the convergence of the borders, each of the three bordering countries has erected an obelisk, painted in the national colors of the country in which it is located. All three countries can be seen from each of the obelisks. [Source: Wikipedia]

Photograph by Yosemite at Wikipedia

Three Country Cairn is the point at which the borders of Sweden, Norway and Finland meet. It is named for the monument of stones erected in 1897 by the governments of Norway and Russia (which was administering Finland at the time). The Swedish could not agree on a boundary commission with the Norwegians and did not contribute their stone until 1901. This is Sweden’s most northerly point and it is the westernmost point of the Finnish mainland (the most westerly point of Finland is on the island Market).

The tripoint monument itself is a yellow dome-shaped stone made of concrete, located about 10 metres (33 ft) out in Lake Goldajarvi (also known as lake Koltajauri). The monument was built in 1926. The size is about 14 square metres (150 sq ft) with diameter of about 4 metres (13 ft). It is reached by walking 11 kilometres (6.8 mi) from Kilpisjarvi in Finland on a public road. In summertime, it can be reached by boat from Kilpisjarvi plus a 3 kilometres (1.9 mi) walk. [Source: Wikipedia]

Photograph by Popp at the German language Wikipedia

Germany, Belgium and The Netherlands Tripoint

The Vaalserberg (“Mount Vaals”) is a hill 322.7 metres (1,059 ft) in height and the highest point in the European part of the Netherlands. The Vaalserberg is located in the province of Limburg, at the south-easternmost edge of the country.

The Vaalserberg is also the location of the tripoint between Germany, Belgium and the Netherlands. Between 1830 and 1919, the summit briefly was a quadripoint, bordering also Neutral Moresnet.

The current Belgian-German-border is not the same as the former eastern border of Moresnet with Prussia; it lies a little more to the east. Therefore, five different borders came together at this point, however never more than four at one time – except possibly for the period 1917-1920, when the border situation was unclear and disputed.

This border intersection has made the Vaalserberg a well-known tourist attraction in the Netherlands with a tower on the Belgian side offering a grand panorama of the surrounding landscape. This tidy and urbanised development stands in marked contrast to the rough cinder parking area that makes up the Belgium sector and the wooded nature reserve on the German side. [Source: Wikipedia]

While some older sources claimed that a quadripoint existed in Africa, where the borders of Namibia, Botswana, Zambia, and Zimbabwe come together at the confluence of the Cuando (also called Chobe) and Zambezi rivers (approximately 17°47?30?S 25°15?48?E), it is now generally believed though still not actually agreed that two separate trijunctions exist perhaps some 100 meters apart.

In August 2007 the governments of Zambia and Botswana announced a deal to construct a bridge at the site to replace a ferry. The existence of a short boundary of about 150 meters between Zambia and Botswana was apparently agreed to during various meetings involving heads of state and/or officials from all four states in the 2006-10 period and is clearly shown in the African Development Fund project map, (matching the US Department of State Office of the Geographer depiction in Google Earth.)

There have been a few international incidents revolving round this particular quadripoint. In 1970, South Africa informed Botswana that there was no common border between Botswana and Zambia, claiming that a quadripoint existed. As a result, South Africa claimed, the Kazungula Ferry, which links Botswana and Zambia at the quadripoint, was illegal. Botswana firmly rejected both claims. There was actually a confrontation and shots were fired at the ferry; some years later, the Rhodesian Army attacked and sank the ferry, maintaining that it was serving military purposes. [Source: Wikipedia]

When Rivers Collide: 10 Incredible Confluences Around the World 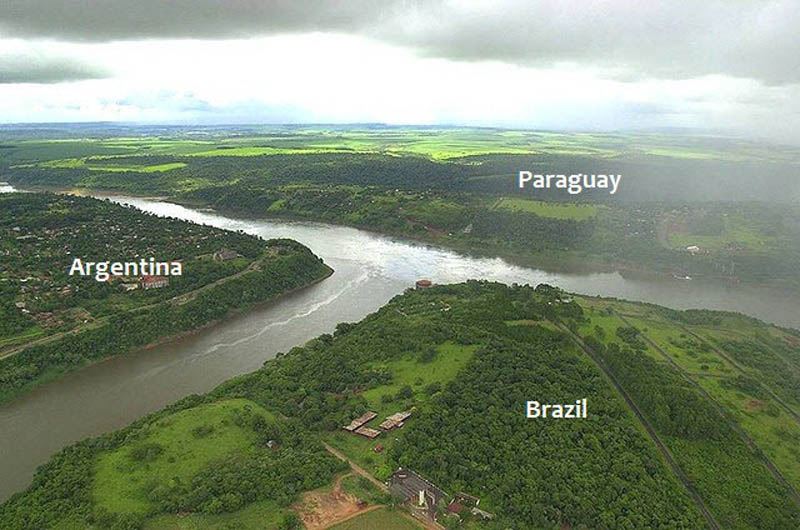