Photograph by NASA via Lloyd B. Eldred/galtham.org

In this amazing aerial photograph by NASA, we see the rollout of space shuttle Atlantis to the launching pad on 4 September 2008. STS-125 was the fifth and final space shuttle servicing mission to the Hubble Space Telescope (HST). After several delays, launch occurred on 11 May 2009 at 2:01 pm EDT. Landing occurred on 24 May at 11:39 am EDT, with the mission lasting a total of just under 13 days. [source]

According to a NASA press release of the event:

The fully assembled space shuttle, consisting of the orbiter, external tank and twin solid rocket boosters are mounted on a mobile launcher platform and will be delivered to the pad atop a crawler-transporter. The crawler will travel slower than 1 mph during the 3.4-mile journey. The process is expected to take approximately six hours.

Crawler-transporters are a pair of tracked vehicles used to transport spacecraft from NASA’s Vehicle Assembly Building (VAB) along the Crawlerway to Launch Complex 39. Kennedy Space Center has been using the same two crawlers, nicknamed “Hans” and “Franz” for the bodybuilding characters, since their initial delivery in 1965. In their lifetime, they have traveled more than 5,500 km (3,400 mi), about the same driving distance as from Miami to Seattle. [source] 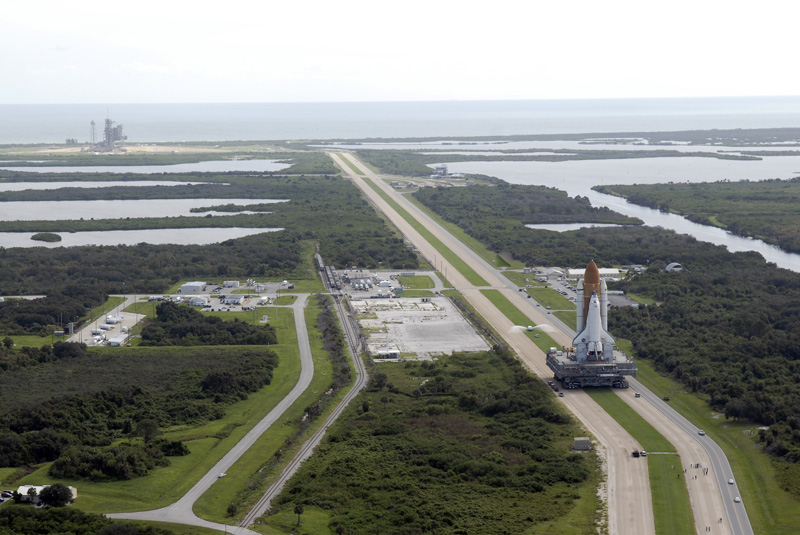