“For What It’s Worth” is an ongoing photos series by Dillon Marsh that combines photography and computer generated elements in an effort to visualise the output of a mine. In addition to the diamond series below, Marsh has also done gold, copper and platinum (see the entire series here)

Whether they are active or long dormant, mines speak of a combination of sacrifice and gain. Their features are crude, unsightly scars on the landscape – unlikely feats of hard labour and specialised engineering, constructed to extract value from the earth but also exacting a price.

The CGI objects represent a scale model of the materials removed from each mine, a solid mass occupying a scene showing the ground from which it was extracted. By doing so, the intention is to create a kind of visualisation of the merits and shortfalls of mining in South Africa, an industry that has shaped the history and economy of the country so radically.

In 1867 a diamond was discovered by a young boy on a farm near Hopetown, in what is now known as South Africa’s Northern Cape province. News of this discovery quickly spread and before long prospectors found several diamond-rich pipes in the region, creating the backbone for bigger towns like Kimberley. Today, the country is one of the world’s leading diamond producers. The immense scale of these open pit mines and the relatively low yield associated with diamond mining make for a dramatic visual comparison. 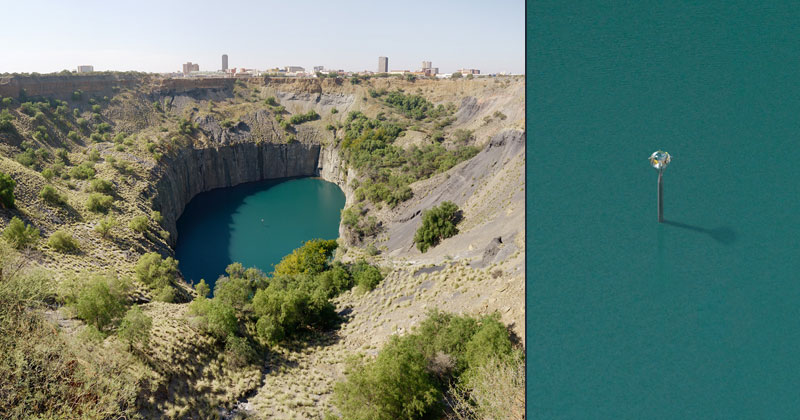