Planet Streetpaining is a collaboration of street artists based in the Netherlands. As Planet Streetpainting’s art director, Leon Keer is always fascinated about what history reveals. He tries to connects the historical events with current issues in this society. For the Sarasota Chalk Festival he has been inspired by the discovery of the Terracotta Army of China and Ego Leonard who washed ashore in Sarasota yesterday morning.

The Terracotta Army is a collection of terracotta sculptures depicting the armies of Qin Shi Huang, the first Emperor of China. The figures, dating from 3rd century BC, were discovered in 1974 by some local farmers in Lintong District, Xi’an, Shaanxi province, near the Mausoleum of the First Qin Emperor.

The figures vary in height, according to their roles, with the tallest being the generals. The figures include warriors, chariots, horses, officials, acrobats, strongmen and musicians. Current estimates are that in the three pits containing the Terracotta Army there were over 8,000 soldiers, 130 chariots with 520 horses and 150 cavalry horses, the majority of which are still buried in the pits.

At the Sarasota Chalk Festival 2011, Planet Streetpainting brought this discovery alive by presenting it as a 3D street painting. However instead of the Chinese Statues he used lego figures as models for his painting. Everybody knows lego from their childhood as a good tool to explore the imagination. The painting will not be an attempt to change the history, but rather to give something informative to the public and question the existing environment of its opportunism and society control.

To make this 3d street painting possible Leon Keer will be accompanied by Remko van Schaik, Ruben Poncia and Peter Westerink. The 4 Dutchmen have worked often together to create large 3d street art all over the world. [Source]

If you enjoyed this article, the Sifter highly recommends: 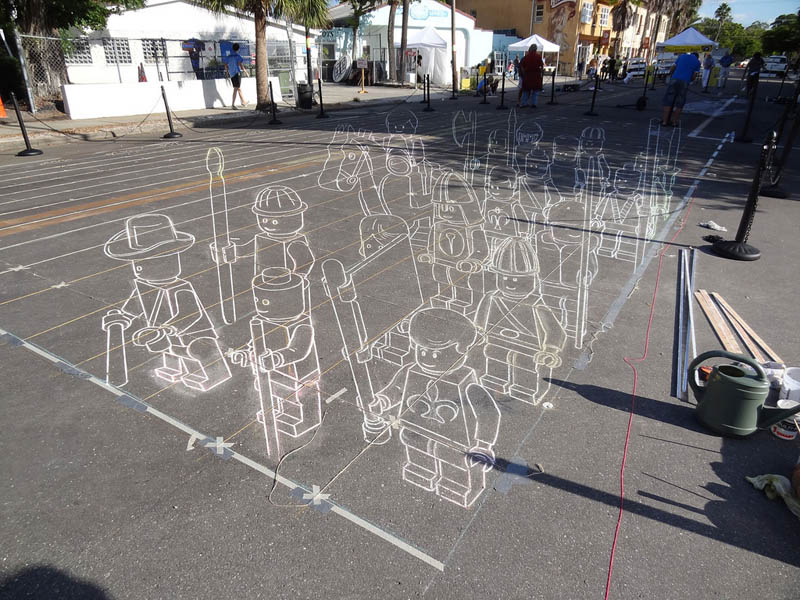