10 Things You Didn’t Know About Chameleons

Any animal that can change colours and look in two directions at once is worth learning more about. Armed with a tongue you have to see to believe, the chameleon may be one of the coolest reptiles on the planet. Here are ten things you may not have known about our lizard friend.

1. Almost half of the world’s chameleon species live on the island of Madagascar, with 59 different species existing nowhere outside of the island. There are approximately 160 species of chameleon. They range from Africa to southern Europe, and across south Asia to Sri Lanka. They have also been introduced into the United States in places such as Hawaii, California and Florida. [Source 1, Source 2]

2. Colour Changing. Most chameleons change from brown to green and back, but some can turn almost any colour. A change can occur in as little as 20 seconds. Chameleons are born with special cells that have a colour or pigment in them. These cells lie in layers under the chameleon’s outer skin. They are called chromatophores. The top layers of chromatophores have red or yellow pigment. The lower layers have blue or white pigment. When these pigment cells change, the chameleon’s skin colour changes.

Chromatophores change because they get a message from the brain. The message tells the cells to enlarge or to shrink. These actions cause cell pigments to mix—just like paint. A chemical called melanin also helps chameleons turn colour. Melanin fibers can spread like spiderwebs through layers of pigment cells and their presence causes skin to darken.

Many people think chameleons change colour to blend in with their surroundings. Scientists disagree. Their studies show that light, temperature and mood cause chameleons to change colour. Sometimes changing colour can make the chameleon more comfortabl. Sometimes it helps the animal communicate with other chameleons. [Source]

3. Chameleon eyes have a 360-degree arc of vision and can see two directions at once. Chameleons have the most distinctive eyes of any reptile. Their upper and lower eyelids are joined, with only a pinhole large enough for the pupil to see through. They can rotate and focus separately to observe two different objects simultaneously, which lets their eyes move independently from each other.

This gives them a full 360-degree arc of vision around their body. When prey is located, both eyes can be focused in the same direction, giving sharp stereoscopic vision and depth perception. Chameleons have very good eyesight for reptiles, letting them see small insects from a long (5–10 m) distance. [Source]

4. Chameleons vary greatly in size and body structure, with maximum total length varying from 15 millimetres (0.6 in) in male Brookesia micra (one of the world’s smallest reptiles) to 68.5 centimetres (30 in) in the male Furcifer oustaleti.

5. Ballistic tongues that are 1.5-2 times the length of their body. Chameleons feed by ballistically projecting their long tongue from their mouth to capture prey located some distance away. While the chameleon’s tongue is typically thought to be 1.5 to 2 times the length of their body (their length excluding the tail), it has been recently discovered that smaller chameleons have proportionately larger tongue apparatuses than their larger counterparts. Tongue projection occurs at extremely high performance, reaching the prey in as little as 0.07 seconds, having been launched at accelerations exceeding 41 g. The chameleon tongue’s tip is a bulbous ball of muscle, and as it hits its prey it rapidly forms a small suction cup. [Source 1, Source 2]

6. Happy Feet. The feet of chameleons are highly adapted to movement in trees (arboreal locomotion). On each foot there are five clearly distinguished toes that are grouped into a flattened section of either two or three toes, giving each foot a tongs-like appearance. On the front feet the outer group contains two toes, whereas the inner group contains three. On the rear feet this arrangement is reversed. These specialized feet allow chameleons to grip tightly onto narrow or rough branches. Each toe is also equipped with a sharp claw to help grip on surfaces when climbing. [Source]

7. Males are typically much more ornamented. Many have head or facial ornamentations such as nasal protrusions or horn-like projections. Others can have large crests on top of their head. [Source]

8. Chameleons can’t hear much. Like snakes, chameleons do not have an outer or a middle ear so there is neither an ear opening nor an eardrum. However, chameleons are not deaf. They can detect sound frequencies in the range 200–600 Hz. [Source]

9. Ultraviolet vision. Chameleons can see in both visible and ultraviolet light. Chameleons exposed to ultraviolet light show increased social behaviour and activity levels and are more inclined to bask and feed. They are also more likely to reproduce as it has a positive effect on the pineal gland. [Source]

How To Unclog Your Toilet Without A Plunger

10 Things You Didn’t Know About Chameleons 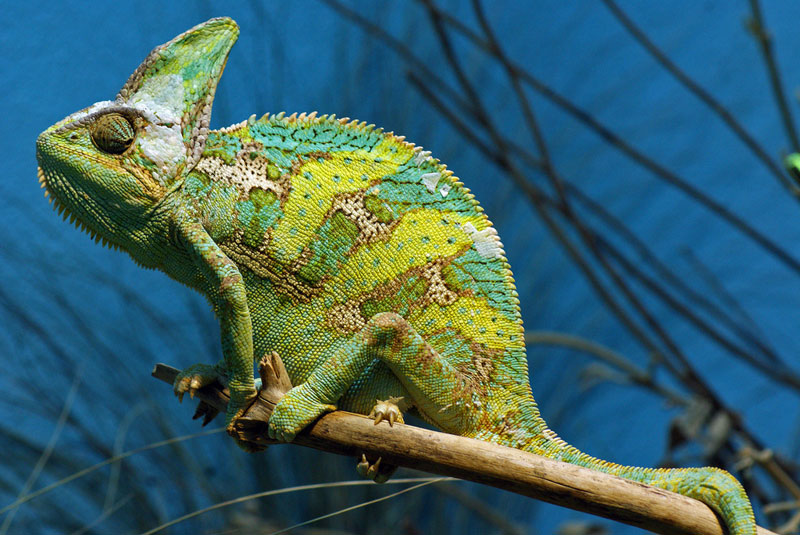