THE ROLLER COASTER
SUBMERGED BY SANDY

The following is from Stephen Wilkes, who has offered limited edition prints of this photo as part of the Art for Sandy Relief Project in collaboration with TIME’s photo editors. All net proceeds from print sales go towards six local charities.

There are moments in journalism when the media captures the visual details of a disaster, yet sometimes misses the true scale of devastation. It was with that in mind that on Sunday, November 4th, I flew in a helicopter over a number of the most devastated areas hit by Superstorm Sandy. Specifically, the devastation in and around Seaside Heights, NJ, and in particular The Star Jet roller coaster at Casino Pier, which was now resting in the Atlantic Ocean.

As I flew over the area, the ocean appeared dead calm; there were no waves, the water looked as if I was in the Caribbean, not the Atlantic. That contrast in itself was surreal to experience, yet as we left the devastation below, I was reminded of the iconic image in the film Planet of The Apes. Charlton Heston, riding horseback along a deserted shoreline, suddenly sees a charred structure rising out of the water, the torch of the Statue of Liberty. In a strange way this image shares a parallel universe, perhaps a warning from post-apocalyptic Earth. – Stephen Wilkes

To learn more about the Art for Sandy Relief Project, visit 20×200.com

via Stephen Wilkes for Art for Sandy Relief 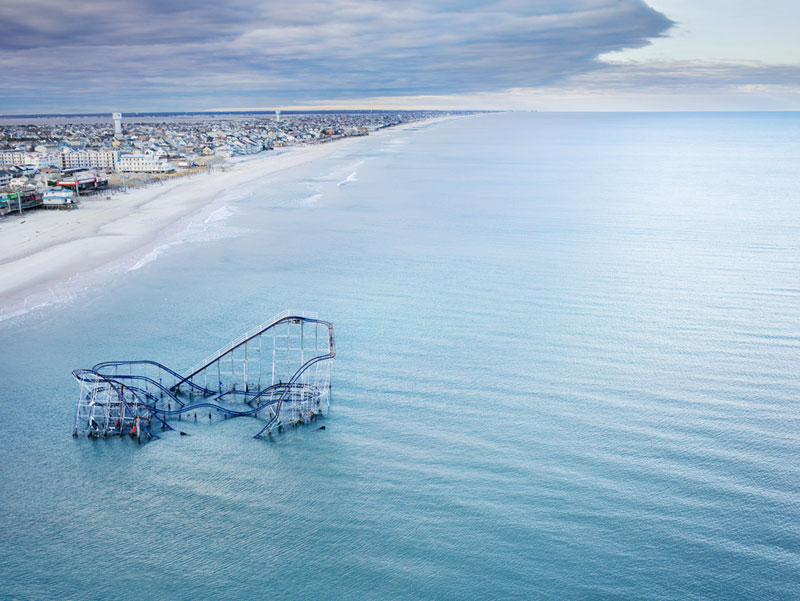