[30 June 2016 press release] Astronomers are using the NASA/ESA Hubble Space Telescope to study auroras — stunning light shows in a planet’s atmosphere — on the poles of the largest planet in the Solar System, Jupiter. This observation programme is supported by measurements made by NASA’s Juno spacecraft, currently on its way to Jupiter.

Jupiter, the largest planet in the Solar System, is best known for its colourful storms, the most famous being the Great Red Spot. Now astronomers have focused on another beautiful feature of the planet, using the ultraviolet capabilities of the NASA/ESA Hubble Space Telescope.

The extraordinary vivid glows shown in the new observations are known as auroras. They are created when high energy particles enter a planet’s atmosphere near its magnetic poles and collide with atoms of gas. As well as producing beautiful images, this programme aims to determine how various components of Jupiter’s auroras respond to different conditions in the solar wind, a stream of charged particles ejected from the Sun.

This observation programme is perfectly timed as NASA’s Juno spacecraft is currently in the solar wind near Jupiter and will enter the orbit of the planet in early July 2016. While Hubble is observing and measuring the auroras on Jupiter, Juno is measuring the properties of the solar wind itself; a perfect collaboration between a telescope and a space probe.

To highlight changes in the auroras Hubble is observing Jupiter daily for around one month. Using this series of images it is possible for scientists to create videos that demonstrate the movement of the vivid auroras, which cover areas bigger than the Earth.

Not only are the auroras huge, they are also hundreds of times more energetic than auroras on Earth. And, unlike those on Earth, they never cease. Whilst on Earth the most intense auroras are caused by solar storms — when charged particles rain down on the upper atmosphere, excite gases, and cause them to glow red, green and purple — Jupiter has an additional source for its auroras.

The strong magnetic field of the gas giant grabs charged particles from its surroundings. This includes not only the charged particles within the solar wind but also the particles thrown into space by its orbiting moon Io, known for its numerous and large volcanos.

Jupiter’s auroras were first discovered by the Voyager 1 spacecraft in 1979. A thin ring of light on Jupiter’s nightside looked like a stretched-out version of our own auroras on Earth. Only later on was it discovered that the auroras were best visible in the ultraviolet.

The Hubble Space Telescope is a project of international cooperation between ESA and NASA. 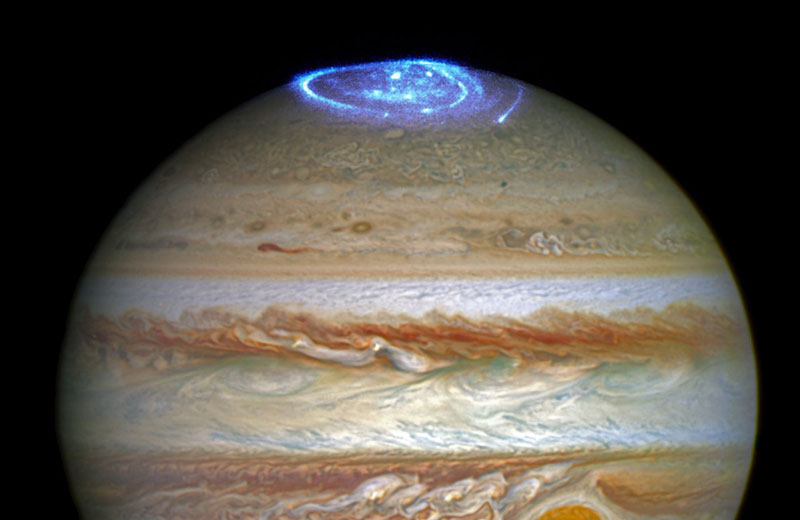