THE KING OF THE RIVER

All hail the mighty alligator! Featured as yesterday’s Picture of the Day on National Geographic, this incredible shot by Larry Lynch shows an intimidating American alligator at night. In his own words:

I made this image at Myakka River State Park in Sarasota, Florida, this past spring. There had been no rain in the river valley for quite a while, and the waters were at drought level. I found this guy in a shallow depression in the riverbed, along with some trapped fish, and knew I had a good chance for an evening shot with flash. [Source]

According to the 2005 Scholastic Book of World Records, Louisiana is the state with the largest alligator population. The majority of American alligators inhabit Florida and Louisiana, with over a million alligators in each state. Southern Florida is the only place where both alligators and crocodiles live side by side. [Source: Wikipedia]

The species, scientists say, is more than 150 million years old, managing to avoid extinction 65 million years ago when their prehistoric contemporaries, the dinosaurs, died off. Heavy and ungainly out of water, these reptiles are supremely well adapted swimmers. Males average 10 to 15 feet (3 to 4.6 meters) in length and can weigh 1,000 pounds (453 kg). Females grow to a maximum of about 9.8 feet (3 meters). [Source: National Geographic]

Click here to purchase a print of this amazing photograph.

via National Geographic Photo of the Day (April 15, 2012) by Larry Lynch
SEE MORE ‘PICTURES OF THE DAY’ 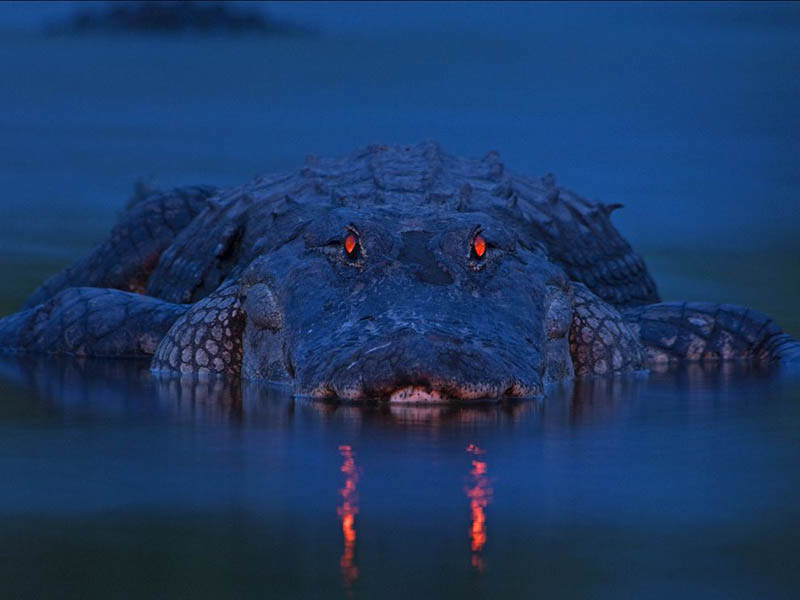