THE THROAT OF FIRE ERUPTS IN ECUADOR

This incredible capture by photographer Patrick Taschler was featured on NASA’s Astronomy Picture of the Day on April 2, 2012. In it we see the Volcano Tungurahua in Ecuador erupting in spectacular fashion. Molten rock pours down the sides of the 5,000-meter high Tungurahua, while a cloud of dark ash is seen being ejected toward the left. Wispy white clouds flow around the lava-lit peak, while a star-lit sky shines in the distance. The above image was captured in 2006 as ash fell around the adventurous photographer. Located in Ecuador, Tungurahua has become active roughly every 90 years for the last 1,300 years.

For a dramatic recount of how Patrick got this shot, head over to Summitpost.org to see the original description.

Tungurahua, (from native language Quichua meaning tunguri (throat), rahua (fire): “Throat of Fire”) is an active stratovolcano located in the Cordillera Oriental of Ecuador. The volcano gives its name to the province of Tungurahua. Volcanic activity restarted in 1999, and is ongoing as of 2011, with major eruptions on 16 August 2006, 6 February 2008, 28 May 2010, 4 December 2010 and 26 April 2011.

Tungurahua (5,023 m) is located 140 kilometres (87 mi) south of the capital Quito. With its elevation of 5,023m, Tungurahua just over tops the snow line (about 4,900 m). Tungurahua’s top is snow covered and did feature a small summit glacier which melted away after the increase of volcanic activity in 1999. [Source: Wikipedia] 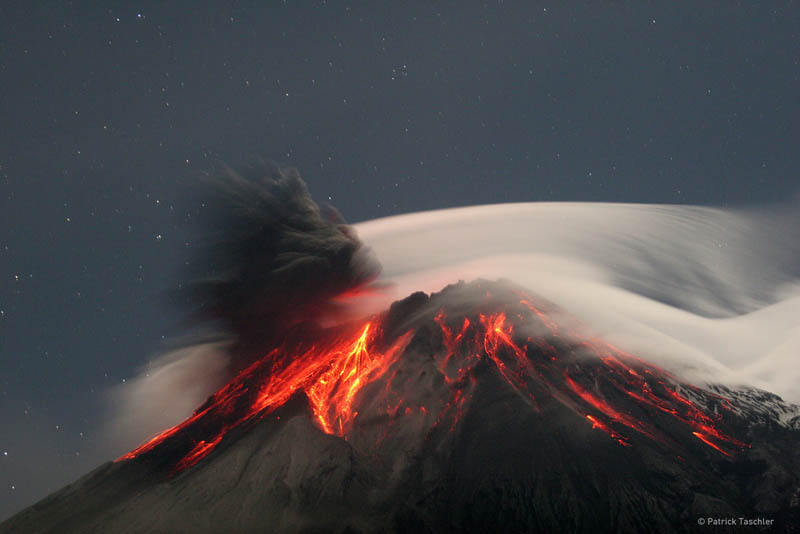