On May 25th, 2012, Space Exploration Technologies (SpaceX) made history when its Dragon spacecraft became the first commercial vehicle in history to successfully attach to the International Space Station. Previously only four governments – the United States, Russia, Japan and the European Space Agency – had achieved this challenging technical feat.

The vehicle was grappled by station’s robotic arm at 9:56 a.m. Eastern. It was pulled in Dragon’s passive common berthing mechanism successfully attached to the orbiting laboratory at 12:02 PM Eastern. [Source]

May 22/Launch Day: SpaceX’s Falcon 9 rocket launched the Dragon spacecraft into orbit from the Cape Canaveral Air Force Station.
May 23: Dragon orbited Earth as it traveled toward the International Space Station.
May 24: Dragon’s sensors and flight systems were subjected to a series of complicated tests to determine if the vehicle is ready to berth with the space station; these tests included maneuvers and systems checks in which the vehicle came within 1.5 miles of the station.
May 25: NASA gave Dragon the GO to attempt berthing with the station. Dragon approached. It was captured by station’s robotic arm and attached to the station.

May 25 – 31: Astronauts open Dragon’s hatch, unload supplies and fill Dragon with return cargo.
May 31: Dragon is detached from the station and returns to Earth, landing in the Pacific, hundreds of miles west of Southern California.

“This mission heralds the dawn of a new era of space exploration, one in which there is a significant commercial space element. It is like the advent of the Internet in the mid-1990s when commercial companies entered what was originally a government endeavor. That move dramatically accelerated the pace of advancement and made the Internet accessible to the mass market. I think we’re at a similar inflection point for space. I hope and I believe that this mission will be historic in marking that turning point towards a rapid advancement in space transportation technology.”

This is SpaceX’s second demonstration flight under a 2006 Commercial Orbital Transportation Services (COTS) agreement with NASA to develop the capability to carry cargo to and from the International Space Station. Demonstration launches are conducted to determine potential issues so that they might be addressed; by their very nature, they carry a significant risk. If any aspect of the mission is not successful, SpaceX will learn from the experience and try again. [Source]

The Dragon Spacecraft by SpaceX

Dragon is a free-flying, reusable spacecraft developed using the best of 21st century technology by SpaceX under NASA’s Commercial Orbital Transportation Services (COTS) program. Dragon is made up of a pressurized capsule that will carry pressurized cargo on this mission and an unpressurized trunk that houses its solar panels and can be used to carry unpressurized cargo.

– SpaceX developed Dragon from a blank sheet to its first mission in just over 4 years.
– In December 2010, Dragon became the first privately developed spacecraft to return safely from orbit – a feat previously achieved by just three nations (the United States, Russia, and China).
– Dragon is 4.4 meters (14.4 feet) tall and 3.66 meters (12 feet) in diameter. The trunk is 2.8 meters (9.2 feet) tall and 3.66 meters (12 feet) wide. With the solar panels fully extended, the vehicle measures 16.5 meters (54 feet) wide.
– Although this demonstration mission carries only cargo, Dragon was designed from the outset with crew-carrying capability in mind; SpaceX is in the process of developing necessary systems for transporting crew, such as seating, a launch escape system, and environmental control and life support systems.
– Dragon has the most powerful heat shield in the world; designed in cooperation with NASA, it is made of a material called PICA-X, a high performance variant on NASA’s original Phenolic Impregnated Carbon Ablator (PICA).
– Dragon is capable of carrying over 3,310 kilograms, split between pressurized cargo inside the capsule and unpressurized cargo carried in the trunk.
– While this mission is carrying cargo only, future Dragon missions will be capable of carrying 7 passengers in the crew configuration.

Vehicles are designed and manufactured at SpaceX headquarters in Hawthorne, CA, which is also home to mission control.

Set on the Atlantic coast of Florida, the SpaceX launch pad is located only three and a half miles southeast of NASA’s space shuttle launch site. Before SpaceX moved in, Space Launch Complex 40 (SLC-40) was used by the U.S. Air Force for many years to launch Titan rockets, which are among the most powerful rockets in the U.S. fleet. Fifty-five Titan III and Titan IV rockets launched from the site from 1965 to 2005. SpaceX took over the facility in November 2007 and became the first purely commercial launch program at Cape Canaveral.

On June 4, 2010, SpaceX successfully launched the Falcon 9 rocket for the first time from SLC-40. Six months later, on December 8, 2010, the company made history again with the first launch of the Dragon spacecraft, the first private spacecraft to successfully return to Earth from orbit. With plans to launch 10 to 12 missions per year in support of NASA space station resupply and commercial satellite customers, SpaceX is building on the strong heritage of Cape Canaveral.

Elon Musk is the chief executive officer and chief designer of Space Exploration Technologies (SpaceX), which develops rockets and spacecraft for missions to Earth orbit and beyond. Musk served as chief engineer for Falcon 1, the first privately developed liquid-fueled rocket to reach orbit, as well as Falcon 9 and the Dragon spacecraft. In 2008, SpaceX won a NASA contract to replace the cargo transport function of the space shuttle with Falcon 9 and Dragon. NASA decided in 2010 to also entrust the commercial sector with astronaut transport. F9/Dragon is considered by many to be the leading system for that role.

Musk’s other primary activity is serving as CEO and product architect of Tesla Motors, where he has overseen product development and design from the beginning, including design of the all-electric Tesla Roadster and Model S sedan. Musk is also the nonexecutive chairman of SolarCity, the leading provider of solar power systems in California.

Prior to SpaceX, Musk co-founded PayPal, the world’s leading Internet payment system, and served as the company’s chairman and CEO. Before PayPal, Musk co-founded Zip2, a provider of Internet software to the media industry. Musk has a physics degree from the University of Pennsylvania along with a business degree from Wharton, and he currently serves as a member of the Stanford University Engineering Advisory Board.

A History of NASA Rocket Launches in 25 High-Quality Photos

How To Unclog Your Toilet Without A Plunger 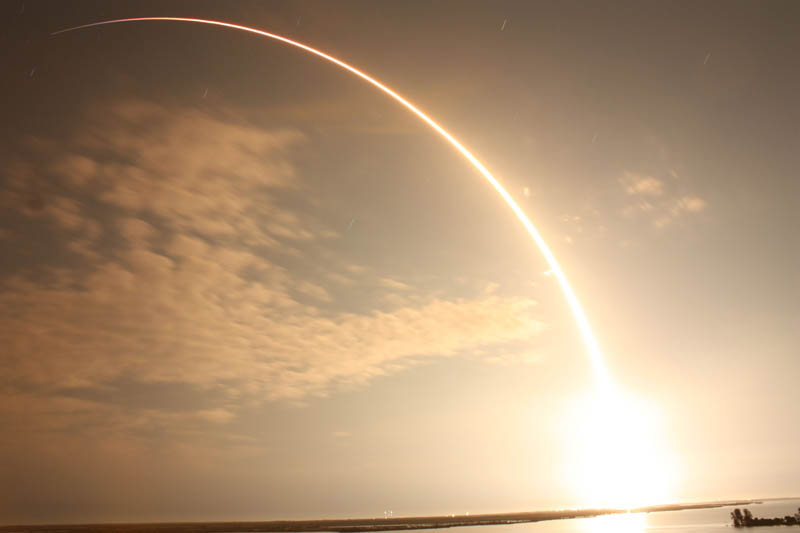