Jon Gnarr (born January 2, 1967) is the current mayor of Iceland’s biggest city, Reykjavik. It’s the northernmost capital in the world and the heart of Iceland’s economic and governmental activity. Here are 12 reasons why Gnarr is the most interesting mayor in the world:

1. He founded the ‘Best Party’ in late 2009
and won the city council election six months later

In late 2009 Gnarr formed the Best Party with a number of other people with no background in politics. The Best Party began as a satirical political party that parodied Icelandic politics. From the beginning, the Best Party admitted that it would not honour any of its promises given before elections (e.g., free towels at public swimming pools, a polar bear display at the zoo and a drug-free parliament by 2020). They claimed all other parties were secretly corrupt, so it promised to be openly corrupt.

On May 29, 2010 it won the most seats on the council, gaining 6 out of the 15 (34.7% of the vote). The incumbent ‘Independent Party’ came in second place with 33.6% of the vote. It was Reykjavik’s fourth different mayor in four years. The unexpected victory was seen by many as backlash in the aftermath of the country’s financial collapse.

In his acceptance speech he tried to calm the fears of the other 65.3% by saying:

“No one has to be afraid of the Best Party because it is the best party. If it wasn’t, it would be called the ‘Worst Party’ or the ‘Bad Party’. We would never work with a party like that.”

Check out the political campaign commercial that went viral online

Gnarr suffers from dyslexia and had learning difficulties growing up. He has been diagnosed with ADHD and has actively discussed his life with ADHD publicly, participated in conventions on ADHD and published articles about his experiences as an ADHD sufferer.

3. He used to call himself ‘Johnny Punk’
and did vocals for the punk band ‘The Dripping Noses’

Jón was known as ‘Jónsi Punk’ as a teenager and was in a punk band called ‘Nefrennsli’ (Dripping Noses). They even have a Myspace page and many of the Best Party members include a ‘who’s who’ of Iceland’s punk rock scene.

4. Before becoming mayor,
Gnarr was a well known actor and comedian

In 1994, Jón teamed up with Sigurjón Kjartansson to form the radio duo Tvíhöfði. In 1997, he joined TV station Stöð 2 where he wrote and starred in several seasons of the Icelandic comedy show Fóstbræður. His best known movies are ‘The Icelandic Dream’ and ‘A Man like Me’. His stand-up comedy show ‘Ég var einu sinni nörd’ (I Used To Be a Nerd) is autobiographical. In 2004 he wrote, starred and produced a short film, ‘The Man On the Back’.

Jón also worked as a creative writer and actor at the Icelandic advertising agency EnnEmm, producing several popular TV ads. He played Georg Bjarnfreðarson on the television series ‘Næturvaktin’ (Night Shift), ‘Dagvaktin’ (Day Shift) and ‘Fangavaktin’ (Prison Shift). He was also a co-writer in the series, which introduced a number of new actors. In 2009 he starred in the feature film ‘Bjarnfreðarson’, which endeared him even further to the Icelandic mass audience. Feel free to check out his IMDB page.

6. He’s Obsessed with the HBO series ‘The Wire’

Jon Gnarr with Clarke Peters (Lester Freamon from ‘The Wire’)

Upon being elected, Gnarr announced that he would not enter a coalition government with anyone that had not watched the HBO series ‘The Wire’. Ultimately, Jón’s Best Party entered into a coalition with the social-democratic Social Democratic Alliance (Samfylkingin) as its junior partner to govern Reykjavík.

In April 2010, he told The Reykjavik Grapevine that season one is his favourite and his most beloved character is Omar Little. His favourite Wire quote is “It’s all in the game, baby”, and he feels television storytelling reached new heights with the series. He feels The Wire needs more public acknowledgement.

8. He Dresses in Drag for the Pride Parade

9. His Daughter Margret is a fitness model and IFBB Competitor with a blak belt in Taekwondo

Margret Edda Gnarr is one of Jon’s five children. Born in 1989, she’s an IFBB Bikini Competitor, Fitness model, Personal trainer, Posing coach and Singer with a black belt in Taekwondo. She was won numerous awards including:

You can find her on Facebook where she has more ‘likes’ than her Dad. You can also find an exclusive interview with her at Cut and Jacked.

10. He has Banksy artwork all over his office

11. He can’t live without the Internet

15 Ways to Get Past an Awkward Moment 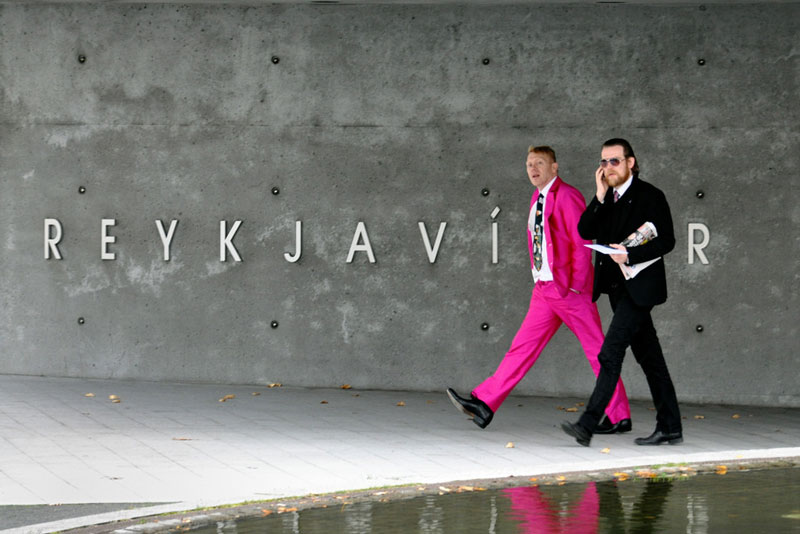