The exploration of man-made structures, usually abandoned ruins or not usually seen components of the man-made environment. Photography and historical interest/documentation are heavily featured in the hobby.

In the latest installment of our interview series, we chat with photographer and seasoned urban explorer Chris Luckhardt, who has not only shared his incredible photography, but also taken the time to answer questions about himself and his urbex experiences.

Can you give the readers a short bio Chris?

My life can be easily summarized with two words: creative exploration. As an entrepreneur, I divide my time between building websites with the Drupal content management system, running my Motionblur Media podcast network and being a semi-professional photographer. During my free time I like to travel, do urban exploration and play lots of guitar.

Where are you from/currently living?

Where was the last place you traveled to?

What was the last book you read?

Tough Sh*t: Life Advice from a Fat, Lazy Slob Who Did Good, by Kevin Smith

What album are you currently enjoying? (doesn’t have to be new)

I’ve been doing a lot of web programming lately and my favourite background music for that is the Blade Runner Trilogy [25th Anniversary Edition]. A recent release I’ve been enjoying is Steve Vai’s concept album The Story of Light.

How long have you been shooting for?

I’ve considered myself to be a serious photographer for approximately 7 years. However, I purchased my first digital camera 10 years ago. Even as a kid, I was especially fascinated with our family’s budget Kodak Instamatic X30 and Disc 4100 cameras.

Do you have a favourite type of photography?

Capturing star trails has always been my favourite photographic pursuit. It’s a less practiced form of photography, making the photos somewhat unique in a sea of worldwide photos being uploaded every second. I enjoy the locations; doing this kind of photograph properly puts you in dark, desolate landscapes where it’s just you and nature – isolated from most of humanity. Often, I’ll shoot star trails with close friends and fellow photographers, making for great conversation and a chance to learn more about the craft of photography.

If you could hop on a plane tomorrow, all expenses paid,
where would you go?

After seeing the Long Way Round documentary, I’ve been inspired to do extensive urban exploration and travel throughout eastern Russia.

Do you have any favourite photographers?

If you were to suggest one album, movie, tv series and book to someone, what would they be?

Any advice for hobbyists and aspiring photographers getting more serious about their photography?

They should experience the art of slow photography.

Where’s the sketchiest place you’ve been?

New Orleans was by far the most dangerous location I’ve explored. We were staying in the Lower 9th Ward (where the worst Hurricane Katrina flooding occurred). Our group was directed to not go outside alone during the day and to not go outside at all during the night. The French Quarter is certainly safe, but the rest of New Orleans was described to us as being like the lawless wild west. Incidentally, the abandoned Six Flags New Orleans theme park was much safer (at least from crime) due to its relative distance from the downtown core.

Is there a city/building that you’re yearning to see?

I would love to explore Michigan Central Station again. It’s my all-time favourite abandoned building, but recently it’s become difficult to gain entry. The owner is doing superficial renovations as a political move to maintain his monopoly on border crossing revenues between Canada and the United States.

I read your post about ‘adventures in Japan’; I would love to know more about your experience getting to Hashima Island. Any thoughts, emotions, anything about this journey would be great!

The journey to Hashima Island actually began as I exited Six Flags New Orleans on the final day of our three-day exploration. A guy in our crew asked if I’d heard about an abandoned island off the coast of Japan. I had known about the island for a few years and happened to know a Japanese urban explorer (via Twitter) named Ikumi who had previously acted as a guide to the island for foreigners.

I contacted Ikumi and six months later (after intense negotiations and numerous translation hiccups) I was sailing to Hashima Island. My exploration of the island was arranged through a network of people, starting with Ikumi and ending with a fisherman who is, on rare occasions, willing to risk taking explorers to the island for a sizable amount of cash. This exploration was precedent setting – we were allotted a record 8 consecutive hours on the island. Other explorers are limited to 2 hours over 2 days. It’s still a mystery why we were given the extended time, but I was very thankful for the opportunity!

The 15km passage to Hashima Island was intricate and carefully choreographed amongst a number of other, smaller islands. Once we sailed up to Hashima island’s sea wall, we had to quickly climb over a set of ladders and run for cover to avoid being spotted by the patrol ships watching the island.

Exploring the island was incredible; I was awestruck for the entire 8 hours (while also staying out of sight of the patrol ships). My words and photos will never be able to properly describe the experience. I can remember every second of every minute of my time on the island. Experiencing silence where over 5,000 people once lived (mostly in cramped, harsh conditions) is like nothing else on this planet. Imagining the life experiences lost to the ocean air is an indescribable feeling. Yet, there is a peacefulness in knowing that you’re stepping inside history. Perhaps one day I’ll have the language to properly describe the sensory overload I experienced that day.

Getting off the island was equally as choreographed as getting onto the island. We received the call from the fisherman and waited on a small landing platform of the sea wall for his arrival. Just as he was approaching, one of the patrol ships sailed around the southern end of the island and headed in our direction. However, for no apparent reason to us, it turned around and headed in the opposite direction. Indeed, it was a close call! We quickly hopped on the fisherman’s boat, ducked for cover, and sailed back to shore (while getting heavily splashed from the sea water).

Exploring Hashima Island was an incredible experience. I’m planning to publish a detailed version of the adventure (including video) this year. Stay tuned!

Any other thoughts about your Urban Exploration experiences?

I’ve been fortunate to do hundreds of urban explorations across Canada, the United States and Japan. Whenever I set foot in a location, I’ve always done so with the utmost respect for the structure and the memories that became part of its history. I never take items from locations; only on a rare occasion will I even move an object to capture a more aesthetically pleasing photograph. I leave the locations as they were when I arrived.

I’ve made some incredible friends while doing urban exploration. Ultimately, those relationships stand as a testament to the adventures we’ve experienced together. We have a good time, document the abandonments, create some art, keep each other safe (regardless of any language barriers) and bring home a few interesting stories to tell our family and friends.

Now and Then: Abandoned School in Detroit 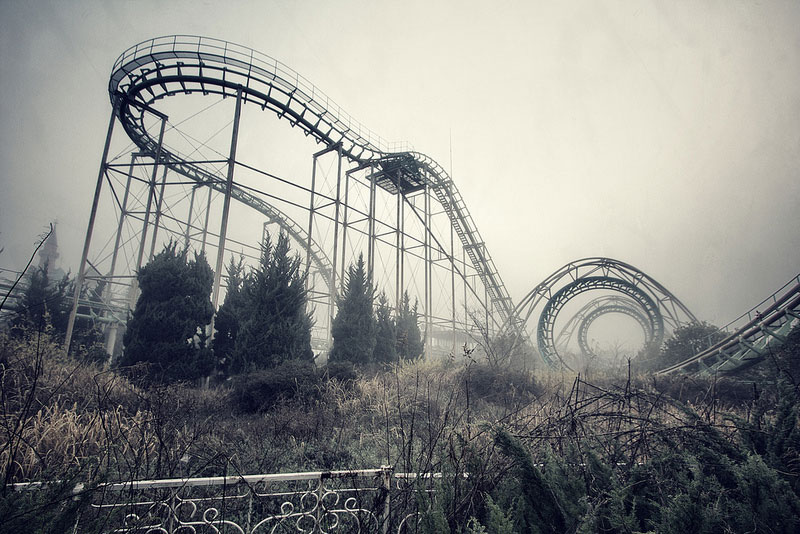