Since 2006, Wikimedia Commons has held an annual competition that ‘aims to identify the best freely licensed images from those that during the year have been awarded Featured picture status’.

Any Wikimedia Commons user that registered before January 1, 2016 is eligible to vote. Round 1 includes all images promoted to featured picture status in 2015. Round 2 includes the top 30 images from Round 1. The top image will be declared as the Picture of the Year. The next two will be featured as runners-up and another nine will be recognized as picture of the year finalists.

To see all previous Picture of the Year winners, click here.

Picture of the Year

NASA’s New Horizons spacecraft captured this high-resolution enhanced color view of Pluto on July 14, 2015. The image combines blue, red and infrared images taken by the Ralph/Multispectral Visual Imaging Camera (MVIC). Pluto’s surface sports a remarkable range of subtle colors, enhanced in this view to a rainbow of pale blues, yellows, oranges, and deep reds. Many landforms have their own distinct colors, telling a complex geological and climatological story that scientists have only just begun to decode. The image resolves details and colors on scales as small as 0.8 miles (1.3 kilometers). The viewer is encouraged to zoom in on the image on a larger screen to fully appreciate the complexity of Pluto’s surface features. caption link. The story of the processing of the image is given here.

A view of the interior of Nasir ol Molk Mosque located in Shiraz. The mosque includes extensive colored glass in its facade that make beautiful colors when light is passed through them and is reflected on the carpets.

The Long Room of the Old Library at Trinity College Dublin

Sunset view from the back of the Seljalandsfoss waterfall, Suðurland, Iceland. The waterfall of the river Seljalandsá drops 60 metres (200 ft) over the cliffs of the former coastline.

Photograph by NASA, ESA, and the Hubble Heritage Team (STScI/AURA)

NASA’s Hubble Space Telescope has revisited the famous Pillars of Creation, revealing a sharper and wider view of the structures in this visible-light image.
Astronomers combined several Hubble exposures to assemble the wider view. The towering pillars are about 5 light-years tall. The dark, finger-like feature at bottom right may be a smaller version of the giant pillars. The new image was taken with Hubble’s versatile and sharp-eyed Wide Field Camera 3.

The pillars are bathed in the blistering ultraviolet light from a grouping of young, massive stars located off the top of the image. Streamers of gas can be seen bleeding off the pillars as the intense radiation heats and evaporates it into space. Denser regions of the pillars are shadowing material beneath them from the powerful radiation. Stars are being born deep inside the pillars, which are made of cold hydrogen gas laced with dust. The pillars are part of a small region of the Eagle Nebula, a vast star-forming region 6,500 light-years from Earth. The colors in the image highlight emission from several chemical elements. Oxygen emission is blue, sulfur is orange, and hydrogen and nitrogen are green.

Port and lighthouse overnight storm with lightning in Port-la-Nouvelle in the Aude department in southern France.

Las Lajas Sanctuary is a basilica church located in the southern Department of Nariño, municipality of Ipiales, Colombia. The place is a popular pilgrimage location since the apparition of the Virgin Mary in 1754. The first shrine was built by 1750 and was replaced by a bigger one in 1802 including a bridge over the canyon of the Guáitara River. The present temple, of Gothic Revival style, was built between 1916 and 1949. 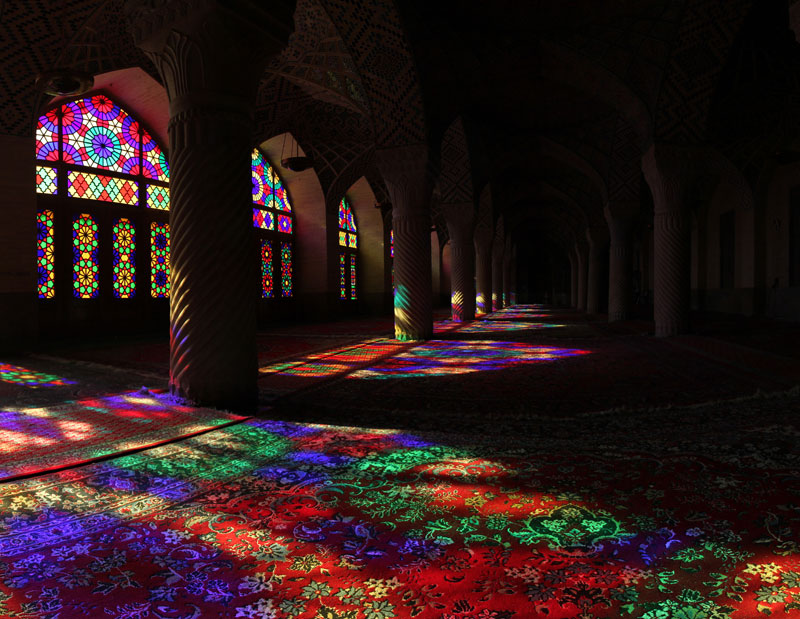